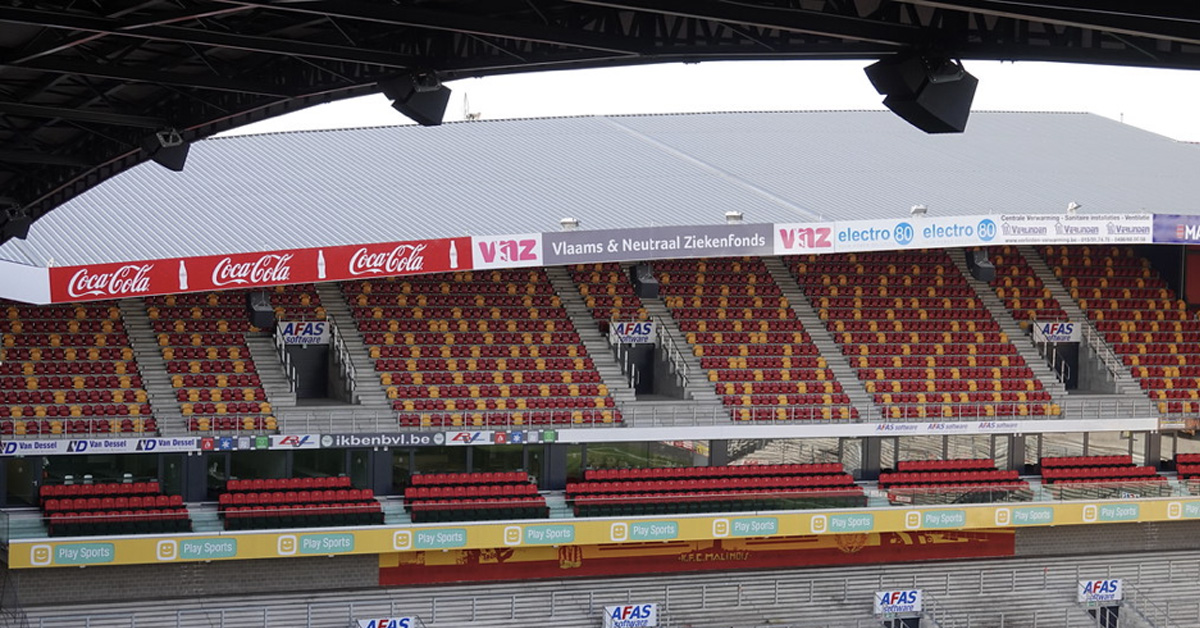 The old main stand has been replaced by a brand-new one with luxurious seats, two-story sky boxes with outdoor seats, a business restaurant and a renewed press and player infrastructure.

The main stand connects to the atmosphere and family stand behind the goal on the west side and is connected to the fitness building on the east side of the field.

After the two new comfortable atmosphere stands at north and west, which were built in 2016, KV Mechelen is now taking a new step with a main stand that focuses primarily on a business interpretation. The capacity remains virtually the same -   2,000 seats are available here - but the extra commercial possibilities will structurally strengthen the club. This way KV Mechelen will be able to realise a new budget increase. Resulting in extra resources to strengthen the sports club.

Attalos - Azari has made an inventory of the needs of KV Mechelen. This overview of requirements helped with the search for partners to design, deliver and integrate the project. The north and west stands had already been renewed in 2016 were an Electro-Voice / BIAMP sound system was installed. Both Attalos - Azari and KV Mechelen preferred to use the same brand of sound system for the new main stand so the existing infrastructure's control and operation could be expanded and the sound characteristics would remain the same.

The program of requirements contained the following components:

·       Integrate the new main stand into the existing BIAMP setup

Based on this, the definitive system design was established in collaboration with EVI Audio and ESP. EVI Audio expanded the existing EASE model of the stadium with the main south stand and the southwest  corner stand. The calculations and simulations for the coverage, sound pressure (dBSPL) and speech intelligibility (STI) were made leading to the final speaker configuration.

Bill of material for Electro-Voice

From the calculations and simulations, the following bill of material and configuration has been established.

Bill of material for DSP and AoIP

Together with Rigconsult, ESP has designed custom frames to be able to mount the clusters on the roof construction of the stadium. The actual manufacturing of the frames was done by Rigconsult.