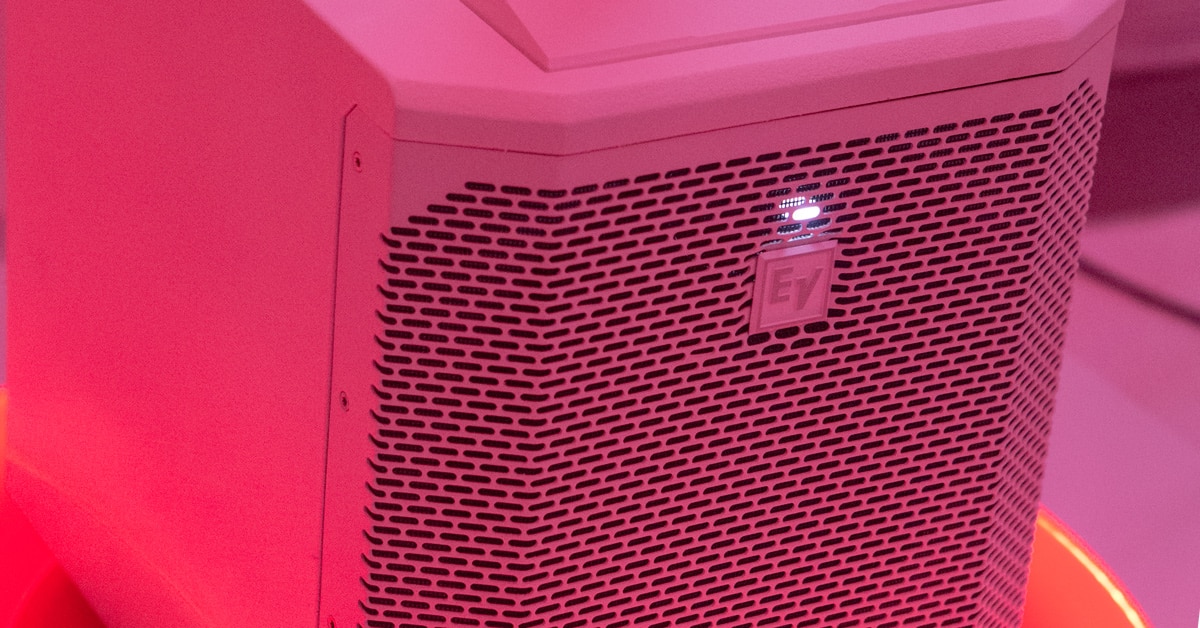 Mixdown magazine has described the new EVOLVE 30M as offering “unprecedented quality in a column speaker setup at this price point”. In its review of the system, Dan Nicholls refers to the EVOLVE 30M as “a benchmark in portable sound” with particular praise for its overall performance. “In use, we were blown away by the quality of sound the 30M produced. With an SPL of 123 dB booming out of a modest 20kg system, the 30M had ample throw to fill large spaces and it's really hard to beat from a single column system.”

Electro-Voice has created a benchmark in portable sound at this price point. Proprietary waveguides shape an ultra-wide 120 degrees of coverage across six lightweight 2.8 inch neodymium drivers and array-formed asymmetrical vertical coverage extends to 40 degrees to ensure optimal dispersion for both sitting and standing audiences. Four tuning ports provide acoustic optimisation, placed subtly at the rear of the enclosure.

The 10 inch subwoofer is cased in 15mm wooden enclosure with 'high-efficiency laminar-flow' vent design for optimal acoustical output. To translate these technical terms; the 30M simply slams. 1000 Watts of power is evenly split between the array and the subwoofer thanks to an advanced Class-D amplifier.

Despite the often arbitrary assignment of names in the audio world, the 'M' in the 30M name stands for Mixer. An integrated eight-channel digital mixer allows you to balance inputs with precision thanks to a system developed by Electro-Voice's sister company Dynachord. Four XLR/TRS combo mic/line inputs, one XLR/TRS line input, one RCA, one 3.5 mm stereo input and one Hi-Z instrument allow for a myriad of setups in this fully configurable system. Individual aux sends offer further routing flexibility. A single knob and LCD combo or the QuickSmart Mobile app control the mixer settings.

QuickSmart DSP controls various system parameters; four presets for Music, Live, Speech and Club, a three-band system EQ, a seven-band graphic EQ (in Mixer Mode) and five user-programmable presets. All these settings are controllable by Bluetooth from across the room so you can fine-tune your setup prior to (or during) performance, as well as phantom power, limiter status and mixer levels. The QuickSmart app also controls studio-quality onboard effects which include 30 presets across two channels, perfect for musicians looking to reduce clutter on stage and simplify their setup.

In use, we were blown away by the quality of sound the 30M produced. With an SPL of 123 dB booming out of a modest 20kg system, the 30M had ample throw to fill large spaces and it's really hard to beat from a single column system. Events are clearly the ideal application, the four system presets covering a wedding perfectly with vows, background music, live performance and a DJ dialled in at the touch of a button. The fact you can pair it with up to six other EVOLVE systems really opens up its potential for large outdoor venues that need increased coverage, but also desire a portable system that can be both set up and disassembled quickly.

Rugged composite material, a powder-coated 18 gauge steel grille and ergonomic handle make the 30M a durable purchase ready for the volatile nature of live music performance or reproduction. Perfect for musicians that need their own sound system for gigs, weddings, events, a professional sound at home entertaining or any live audio situation that calls for room-filling professional sound. The EVOLVE 30M simply offers unprecedented quality in a column speaker setup at this price point.