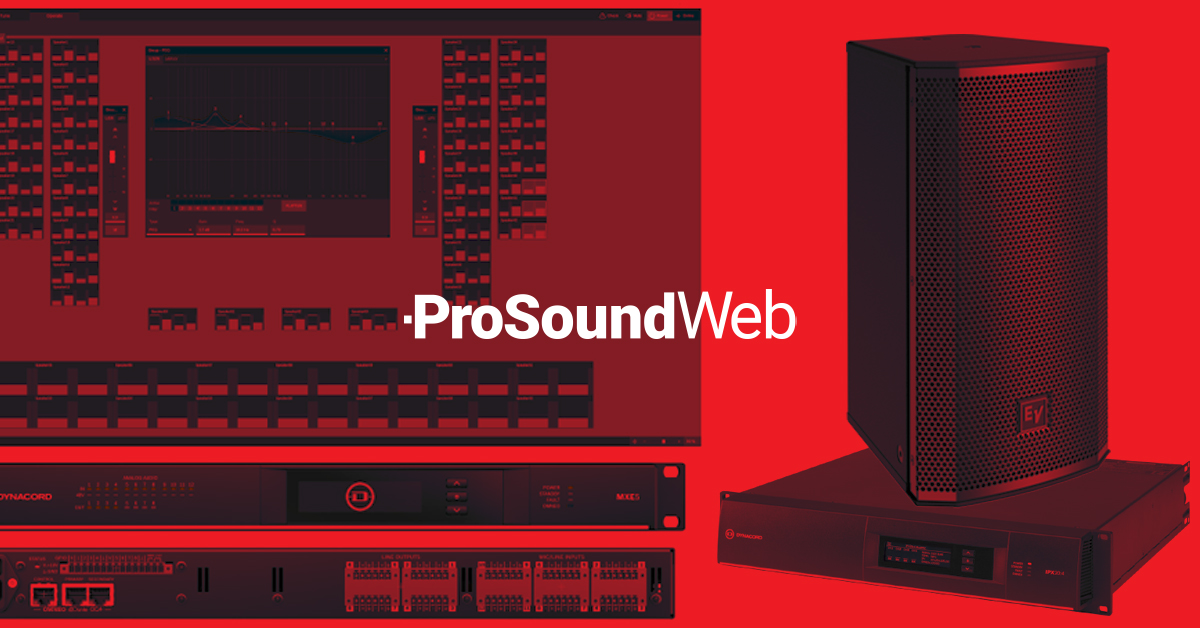 REVIEW: Checking out a pair of EVC-1082-96 loudspeakers for install applications in tandem with an MXE5 matrix processor and IPX20:4 four-channel amplifier.

Over the last few years, the loudspeaker and amplifier market has continued its move towards integrated ecosystems, packing loudspeakers together with processing and amplification in an easy-to-operate packages designed to help ensure optimal performance.

I recently had the chance to evaluate one such example of a package consisting of Dynacord amplification and processing driving Electro-Voice loudspeakers – specifically, this particular rig consisted of a Dynacord IPX20:4 four-channel amplifier and an MXE5 matrix processor joined by a pair of EVC-1082-96 enclosures.

Upon unboxing I immediately liked the small form factor (approximately 19 x 9 x 11 inches) and felt that it would be a good fit for short-throw install situations such as fill positions in house of worship environments. Because it’s an install product, there are no pole mount cups, with the cabinet instead sporting eight standard M10 suspension mount points.

When I set up the loudspeaker up in my shop, I observed that both the frequency response and beamwidth were well behaved and matched what is stated on the specification sheet, which also indicates axial sensitivity of 91 dB SPL (1W/1m) and a maximum calculated SPL of 120 dB.

I also performed an M-Noise procedure on the EVC-1082-96 and achieved results of maximum linear SPL of 111 dB SPL RMS (123 dB peak) from 1 meter. Interested readers will note that the EVC hit the stop condition of 2 dB power compression in the low-frequency driver range at the same point that it hit the 91 percent CohSq stop condition in the high-frequency driver range, which indicates to me that the driver capabilities and the associated amplifier presets are all well matched.

I listened to the loudspeakers without a subwoofer, using the full-range preset, and to my ear they sounded well balanced and clear, free of the 1 kHz “honk” that sometimes plagues small-format loudspeakers.

Next up was the Dynacord MXE5, a 24 x 24 matrix mix engine that occupies just a single rack space and hosts 12 analog mic/line inputs and 8 analog line outputs as well as 24 x 24 Dante IO. Maximum analog input/output signal level is stated as +22 dBu, and while an additional 2 or 3 dB would be preferable to accommodate the maximum output level of a modern mixing console, it’s perhaps less likely to present a headroom bottleneck in the install realm.

The demo unit I was provided included a handy (and handsome) 2U rack panel (model CP-MXE) for patching the 12 analog inputs, 8 analog outputs, plus AES, Dante and network control. The construction and connections felt solid and I’d have no qualms about using this configuration in a live production environment.

The MXE5 and the IPX20:4 amplifier (which comes from Dynacord’s install amplifier series, a variant of the TGX touring series that I reviewed previously last year) are both managed via SONICUE software suite. I wasn’t overly familiar with SONICUE, having only used it once or twice in the past, but I watched a few short instructional videos on the Dynacord YouTube channel and was well on my way.

Upon arriving the setup page for the MXE5, the first act is to open the Input Patch dialog and route signals from the 12 analog and 24 Dante inputs into the 24 matrix input processing channels. Once a matrix input has a source assigned, its signal chain is created in the control screen.

As a proponent of clean and organized workspaces, I appreciate this design choice because it means the workspace is not cluttered with controls for unused/unpatched channels. This dialog also offers the ability to add “friendly names” to each input channel, which further aids organization.

Then signals hit the Zone Mixer, where they are routed to a user-configurable combination of output buses per zone, each of which can be mono or stereo and offers delay, level, mute, polarity, a 5-filter EQ block and a full complement of loudspeaker processing (more EQ, crossover filters, limiter, and the ability to load speaker presets) before reaching the output patching module that routes to the 8 analog and 24 Dante outputs.

I couldn’t find a quick way to copy/paste EQ parameters between modules, but I did discover that I could multi-select and operate on multiple channels of processing at once, which certainly speeds the work along, particularly in a live situation.

As a system engineer, I’m always interested in new matrix mixer/DSP products, especially in the “mid-market” price tier. I need to be able to offer my clients a tool that has more extensive and full featured processing and routing than the “entry level”/MI fixed-function processors offer, but at a reasonable and realistic price point. The MXE5 fits well in this category, and after my time working with the unit I’m already considering it as a potential solution for an installation project I’m currently working on.

The TPC-1 can be mounted in-wall and powered via PoE. Install applications are furthered by the MXE5’s GPIO and Logic control functions – an area I don’t often venture into as my work is primarily in live events, but definitely adds some versatility to the unit’s functionality in that space as well.

In short, the Dynacord MXE5 offers a solid matrix mixing and system processing feature set at a very reasonable price point and is well worth a look for folks in need of processing and matrixing for venues and installed systems, especially if EV loudspeakers and Dynacord amps are in use, given the MXE5’s tight and straightforward integration with those products.