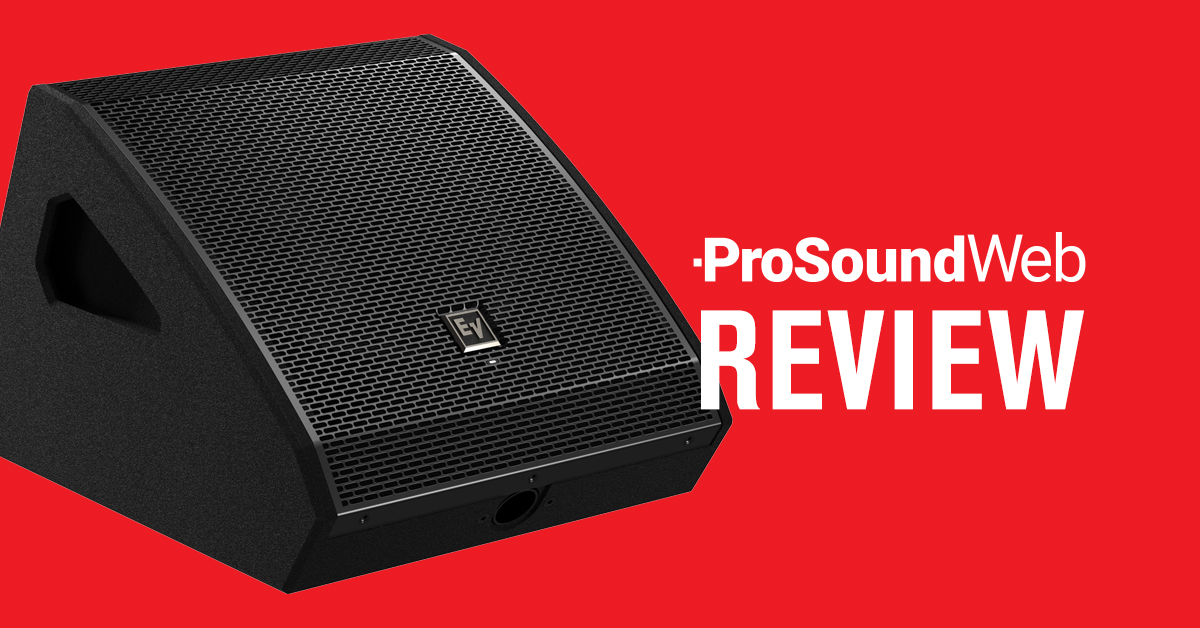 prosoundweb.com made an in-depth review on the PXM-12MP stage monitor from Electro-Voice

Checking out a recently released powered coaxial monitor that can do a lot more.

The new Electro-Voice PXM-12MP is a powered co-axial stage monitor that was introduced at the NAMM show last January, and it marks the company’s debut in the powered monitor market. However, the PXM-12MP can actually serve as a multi-function loudspeaker incorporating a 12-inch woofer and 1.75-inch driver coaxial transducer that offers high output in a lightweight, small-footprint cabinet.

It’s powered by a class-D Dynacord-engineered amplifier stated to deliver 700 watts (500 for lows, 200 for highs), and also onboard is DSP and a 3-input mixer. The DSP includes individual presets for use as a floor monitor (x2), main loudspeaker and guitar cab.

Stated dispersion is 90 x 90 degrees, and when used in a stage wedge role, it offers a monitor angle of 55 degrees. Frequency response is listed as 64 Hz to 20 kHz (-3 dB) and 53 Hz to 20 kHz (-10 dB), with maximum SPL of 129 dB. The enclosure is made from 15 mm plywood and has a rugged black colored EV-Coat finish topped with a black powder-coated and fabric-backed steel grille. It measures 13.1 x 16.1 x 19 inches (H x W x D) and weighs 29.8 pounds. The cabinet is outfitted with a carrying handle per side, a pole socket mount on the front (more on this later), and a recessed connector and control panel on the side.

The user can also adjust the EQ with treble, mid frequency and bass controls, enable a high-pass filter if the loudspeaker is going to be used with a subwoofer, engage a narrow notch “feedback” filter, and employ phantom power to channels 1 or 2. In addition, users can select the routing to the MIX output and adjust a delay for the loudspeaker (up to 328.1 feet or 100 meters). Settings can be stored, recalled and locked, and there’s also the ability to reset the default settings.

Unpacking the boxes in my shop (EV provided two units), the first thing I noticed was the light weight of the PXM-12MP. My old back prefers lighter gear now that I get the senior discount at my favorite restaurant, and at under 30 pounds, the cabinet is easy to handle. Next, I noticed the attractive look of the cabinet, with a pleasing curved shape sporting the heavy-duty powder-coated grille backed by fabric. Another feature that caught my eye was a cutout in the rear of the cabinet just next to the recessed control panel allowing users the option to route cables from the rear of the box as well as from the side. (Nice touch!)

I’m a big fan of coaxial monitors and they’re the only type we carry in my company’s inventory. They have a more compact footprint than traditional 2-way designs as well as providing a more uniform sound throughout their coverage pattern.

It was easy to navigate the menu to get to all the different settings. I plugged in different microphones and a tablet with a bunch of test tracks and gave the units a listen. Sonic quality was excellent, and they went way louder than I would ever need on the gigs my company typically works.

Scrolling through the different voicings I noticed that the MONITOR 2 setting supplied a nice low-end “bump” that would be perfect for use as a drum wedge without a sub or for performers who wanted some added low end on stage. Curious as to what the GUITARCAB setting sounded like, I grabbed a guitar and a pedal and plugged them into channel 2. The setting seems to emulate a guitar cabinet well, without a lot of the horn sound, just full-range cone speaker sound.

Placing one of the wedges on a tripod, I experimented with it as a mains cabinet. The TRIPOD tuning is really dialed in for this application. I also really like the stand socket placement; at first I thought the socket should have been positioned on the side opposite of the control panel, but after placement on the tripod, it dawned on me that if the socket was located on the side, the inputs and controls would be located on top, and in that position they would not be easily accessible. The DSP includes some settings for use with current EV subwoofers, and there are also adjustable crossover points so users can match up with any subwoofer.

The onboard 3-band mid-sweep EQ is quite handy. On many gigs, we run a monitor or loudspeaker on delay via a small analog console’s aux send, and there’s no onboard or outboard EQ onboard available. I think having built-in phantom power, delay and a feedback notch filter are also great additions to the onboard processing.

Electro-Voice also sent along the PXM12-MP-CVR covers for the monitors. They’re quality form-fitting padded units made from water-resistant nylon designed to protect against moisture, dust, and dirt, as well as guard against dents and dings. The covers also have a cable pocket that closes with Velcro, along with Velcro tabs to keep the covers in place.

Like most production companies at present, most of our gigs have gone away this summer because of the pandemic, but I had a chance to take the PXM-12MPs out for a 2-day live performance recording session for a webcast at my a colleague’s church. It was decided that we would use the PXM wedges as the downstage units because they’re quite low profile and compact, and they’d also look great on camera.

The performers would do a few songs each in an empty room, but were multitrack recorded for mixdown later, with a slew of cameras capturing plenty of video. One day 1, the first act was a piano player who also sang, and I placed a wedge to his left and just ran a little vocal back to him with a touch of reverb. He complimented us on how great the wedge sounded.
Next up was a female guitar duo who also both sang, so we gave each a wedge fed by a separate mix. They were ecstatic at the sound of both their instruments in voices.

The final act before lunch was a trio consisting of two male guitarists/singers joined by a percussionist who also sang. Having only two wedges, we gave both boxes the same mix and placed them so all three musicians could hear. They immediately noticed how much more attractive and compact they were compared to the church’s own large two-way 15-inch carpeted cabinets.

At lunch, the director also complimented the look of the PXM-12MPs and asked if I could bring a few more for the next day with when the larger praise band would be recorded. Because we only had a pair of the EV boxes, I offered to instead supply some of my company’s own smaller coaxial boxes.

After lunch a few different singers performed to tracks and we decided to set the monitors on tripods outside the camera shot at the stage wings and use them more in a “side fill” configuration. Without ever having seen the control panel or instruction manual, my colleague easily set the DSP to the TRIPOD setting. The performers really liked the sound quality as well as how they could move around and still hear themselves and the tracks.

After the recording session ended, my colleague and I took some time to work further with the loudspeakers. Like me, he was really impressed with the numerous DSP options, the sonic quality, and how loud they could get for being so compact. Grabbing a smaller 18-inch subwoofer the church owns, we played with the crossover feature and were both impressed at how well it will perform as a small front of house system, easily filling the gymnasium-sized room with coverage.

Day 2 was all about the big praise band with different singers and solo musicians featured on various songs. We set the wedges downstage center about six feet apart and splayed in toward each other, creating a nice, large “sweet spot” of coverage for the soloists and lead singers. The “Thru” output made it easy to wire the pair on the same mix.

It seemed that almost every performer who played or sang through them commented on the sonic quality and how much better they looked than the church’s bulky monitors.

Suffice to say that the PXM-12MP is a versatile box. With the wide coverage pattern, I can see performers needing fewer wedges on stage, which can come in very handy considering just how many stages are small. Guitar and bass players can use them as practice or gig cabinets, and as monitors or mains on shows. DJs can use them as monitors or mains and production companies like mine benefit from a versatile box that can be deployed in numerous situations.

I think Electro-Voice knocked it out of the park with the PXM-12MP multi-function loudspeakers. They sound great, are versatile, offer a load of features, look sharp, are compact and lightweight, and come in at a great price.